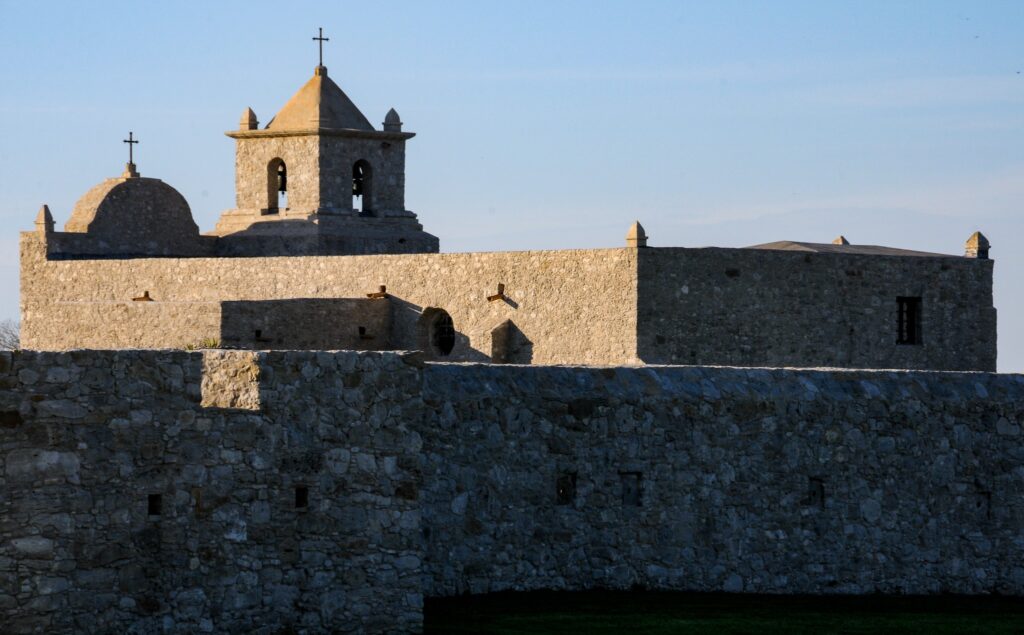 Our plan was to move inland, away from the coast and into the area of Texas between Austin and San Antonio known as the Texas Hill Country. Fredricksburg is the town that Lysette wanted to visit for cycling so it became our destination. We needed one stop on the way there based on our speed and desired distance of travel and found an RV park in the small historical community of Goliad, Texas.

The drive from Galveston took us along the coast through many more beach communities. There were places where RV’s were boondocking on the beach which was intriguing but I can never get past the salt and what that might do to any rig. To the north side of the road were a few neighborhoods but also large swaths of marshy coastal areas where we spotted a bunch of migratory birds to include Caracaras (Mexican Eagle) and Roseate Spoonbills, which was pretty cool as we didn’t expect to see them this far north, but is apparently normal.

As we got closer to Freeport we entered more laid back beach communities with industrial oil and gas complexes filling in the horizon along the shore. The coastal road ended with a sharp right turn north followed by a high bridge. On the downside of the bridge we noticed lots of birds up ahead, flying about in a marshy slough (slew), creek or bayou. We pulled over and sure enough we got some great close-up views of the Roseate Spoonbills, those pink birds we spent time searching for while in the Everglades. They were enjoying their time here, in the unlikely place with an oil refinery on the horizon, and mixed in with lots of herons and egrets feeding in a shallow muddy spot just off the road. We decided to make a quick stop for some up close viewing, photographs, and to allow Toohey some time to stretch, sniff, and whatnot. 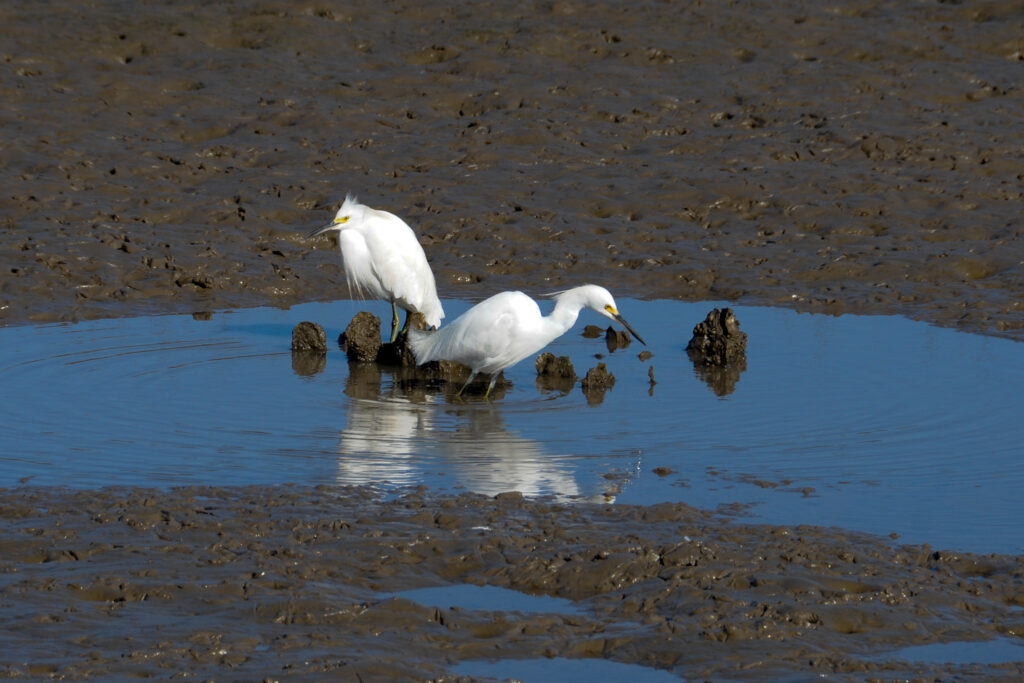 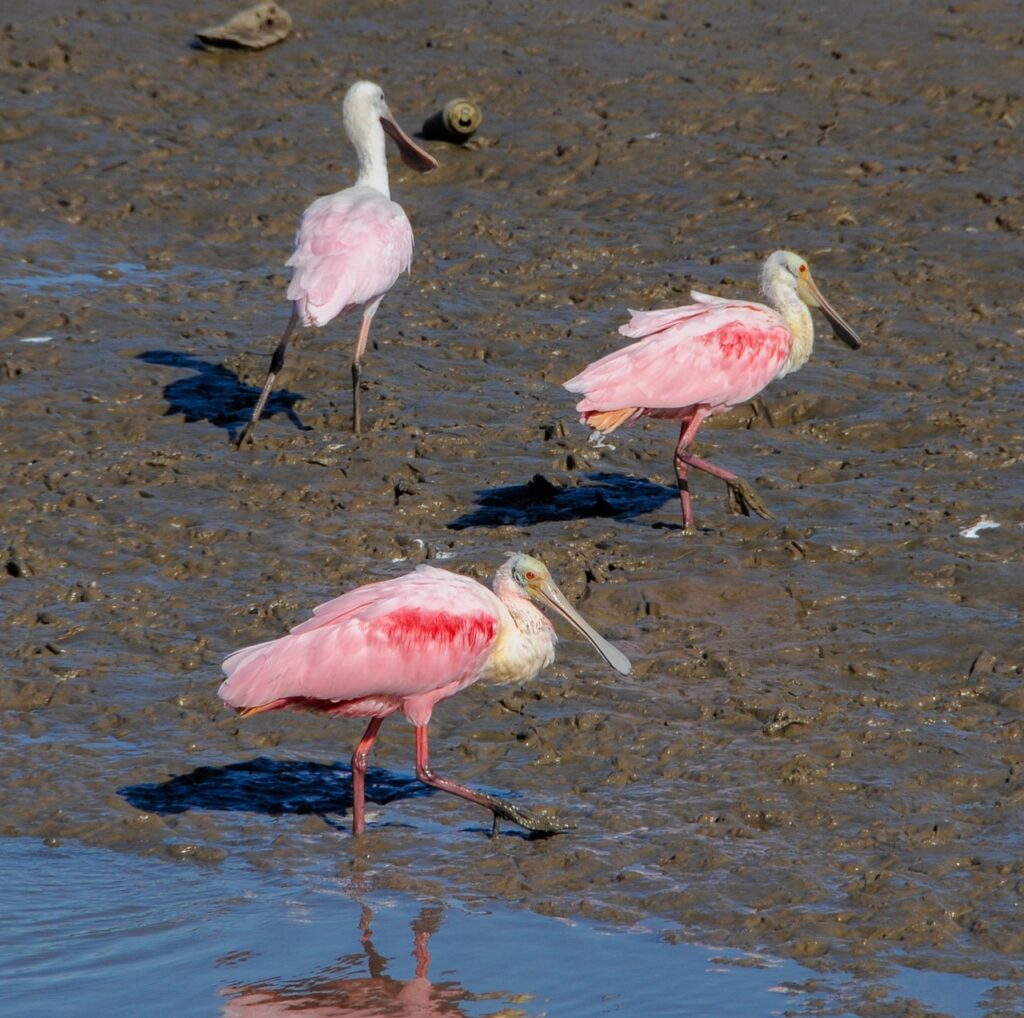 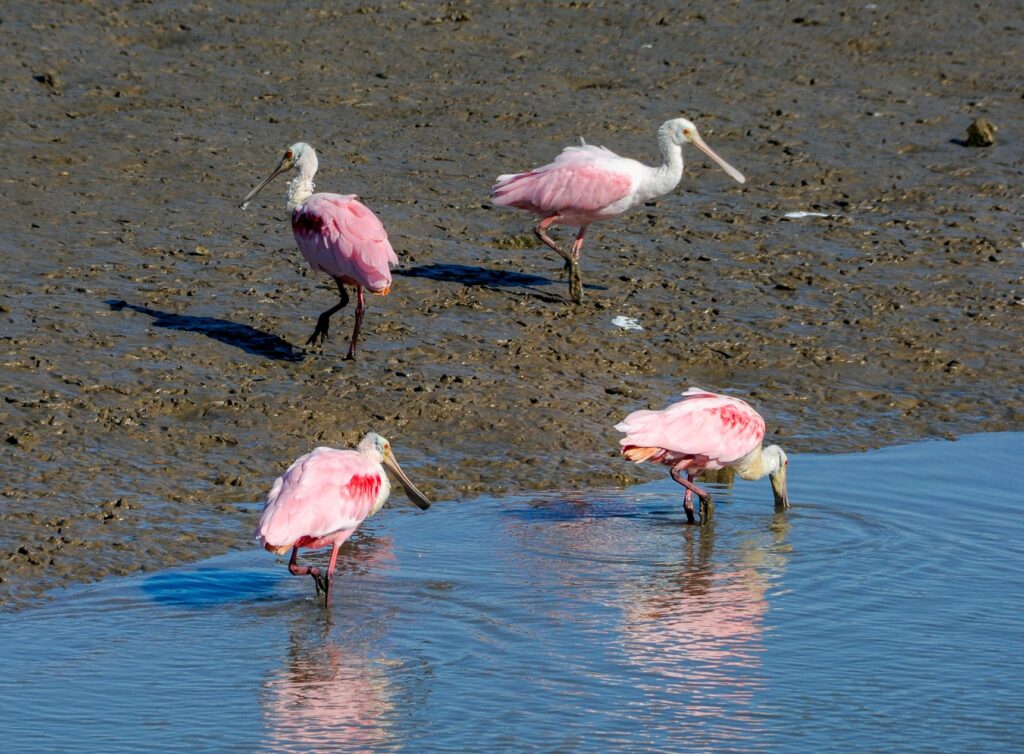 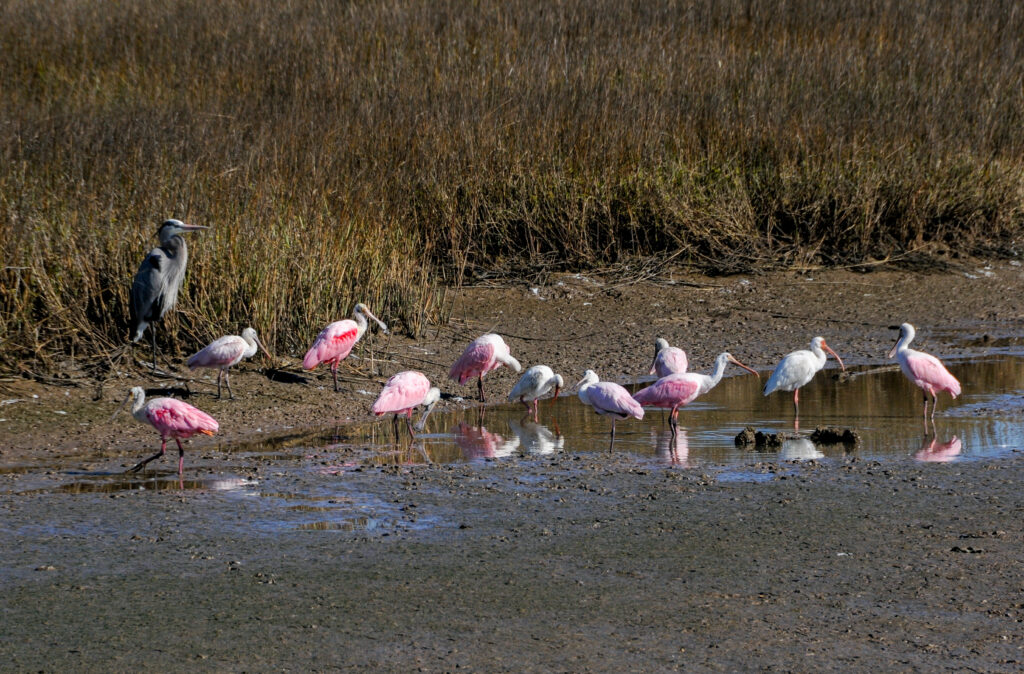 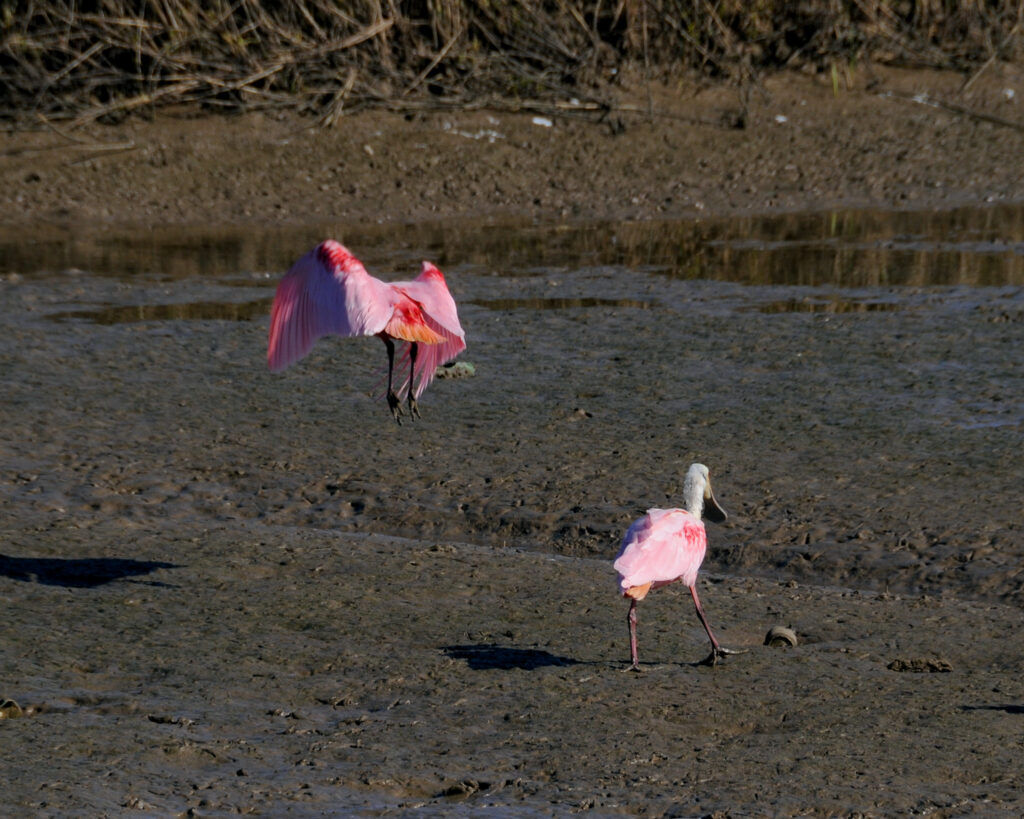 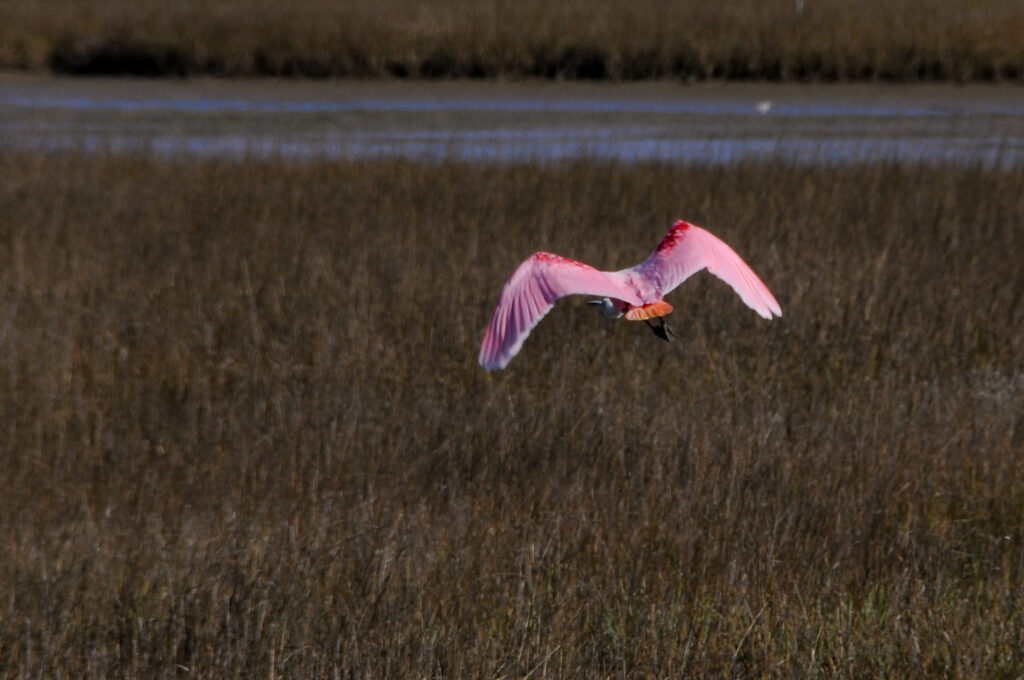 Our drive continued on as we left the coast, now seeing more agriculture, ranches, and farms. We greatly enjoyed all the coastal experiences but were becoming numb to it, tired of the tourist thing, and needing more of the solitude, quiet of the smaller roads, towns and just a slower pace. 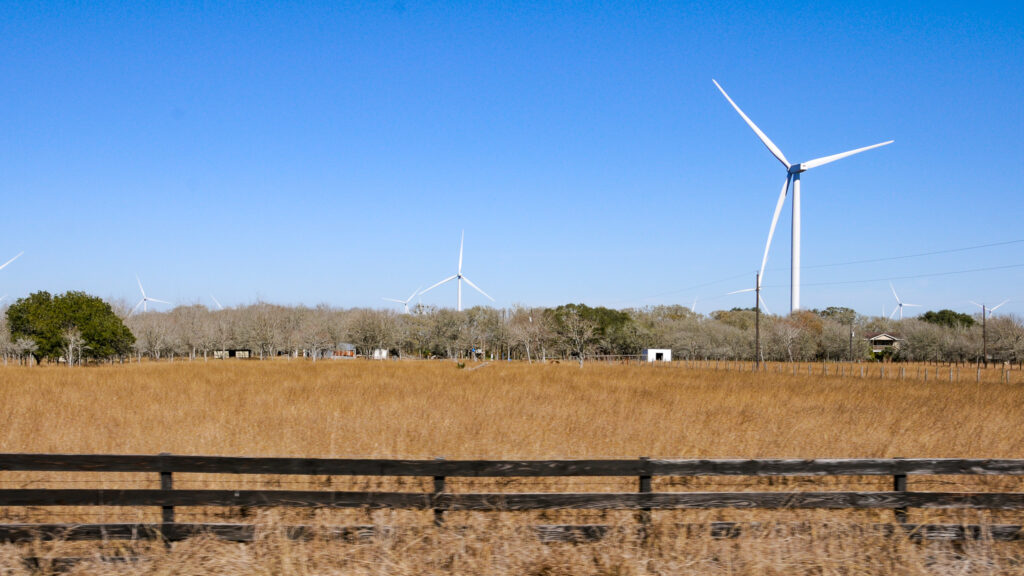 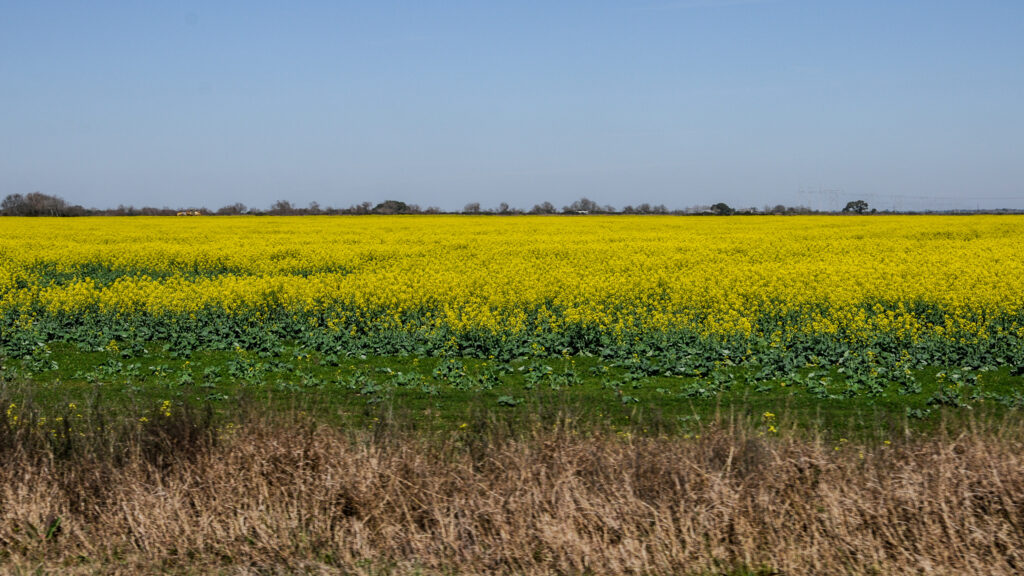 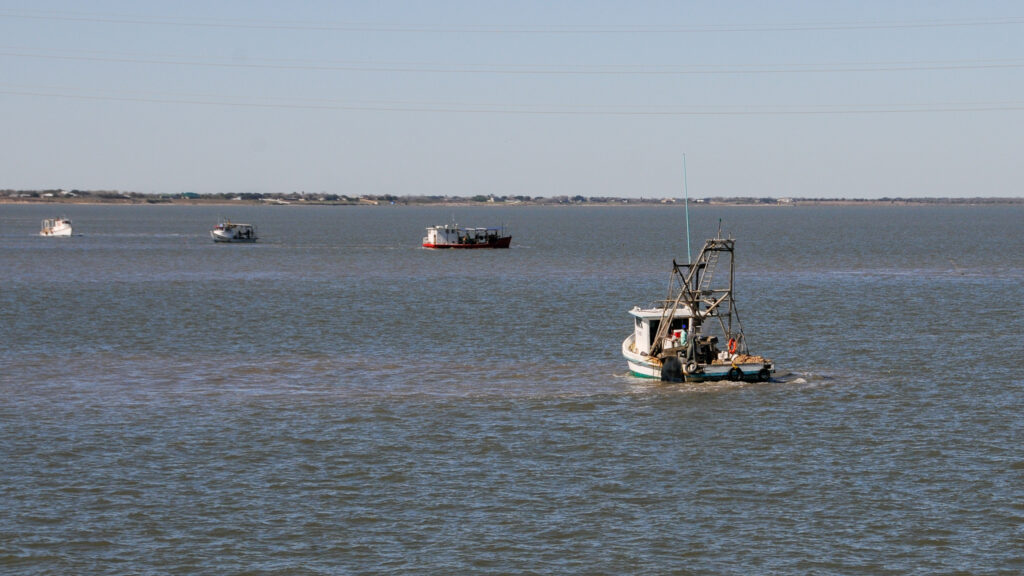 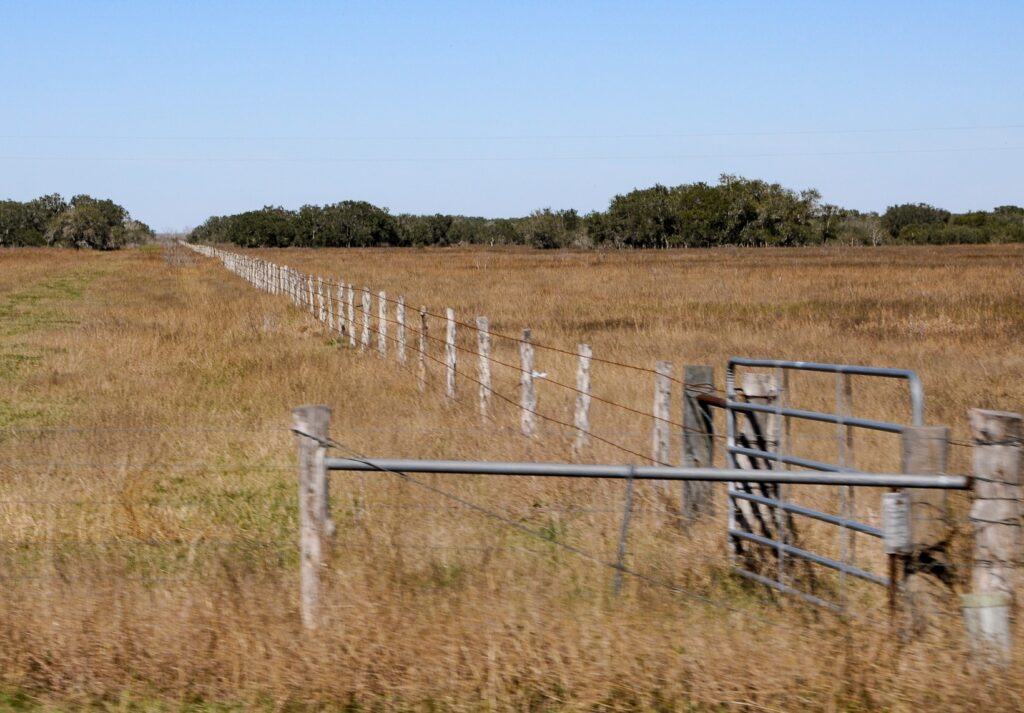 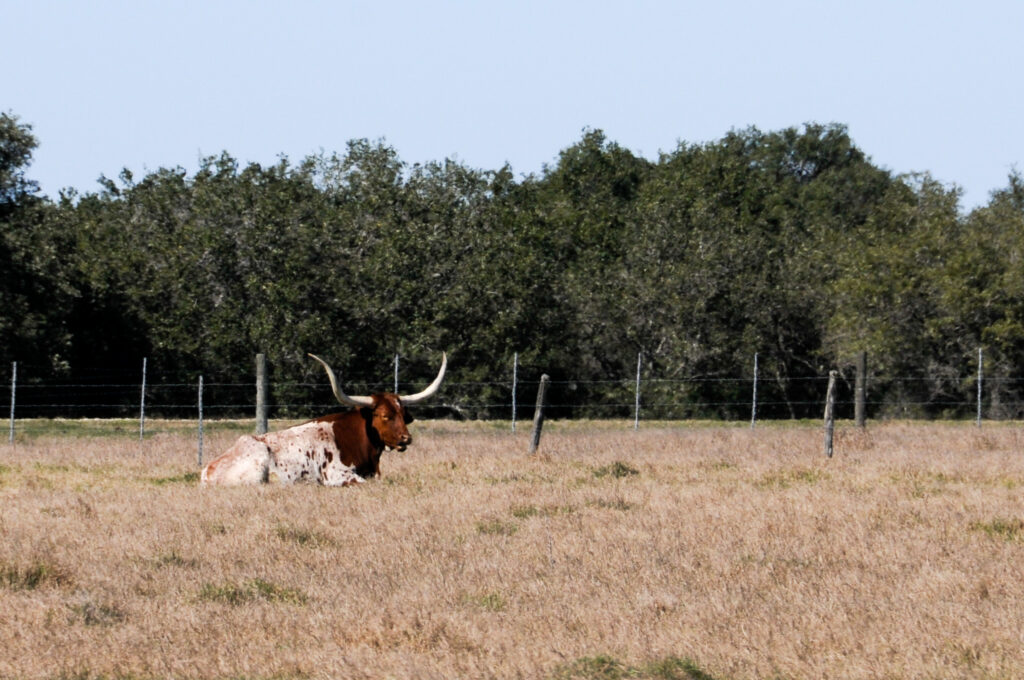 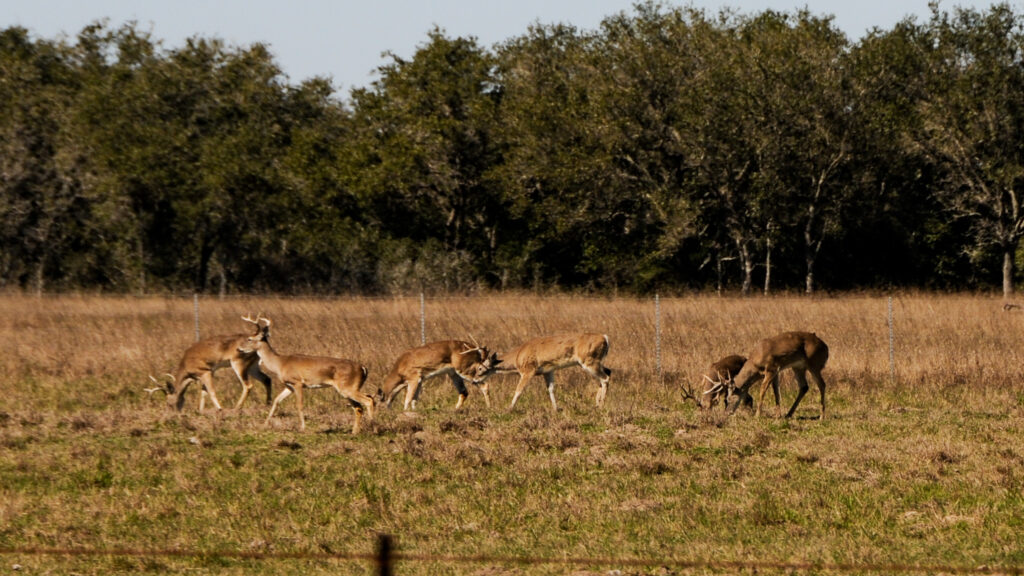 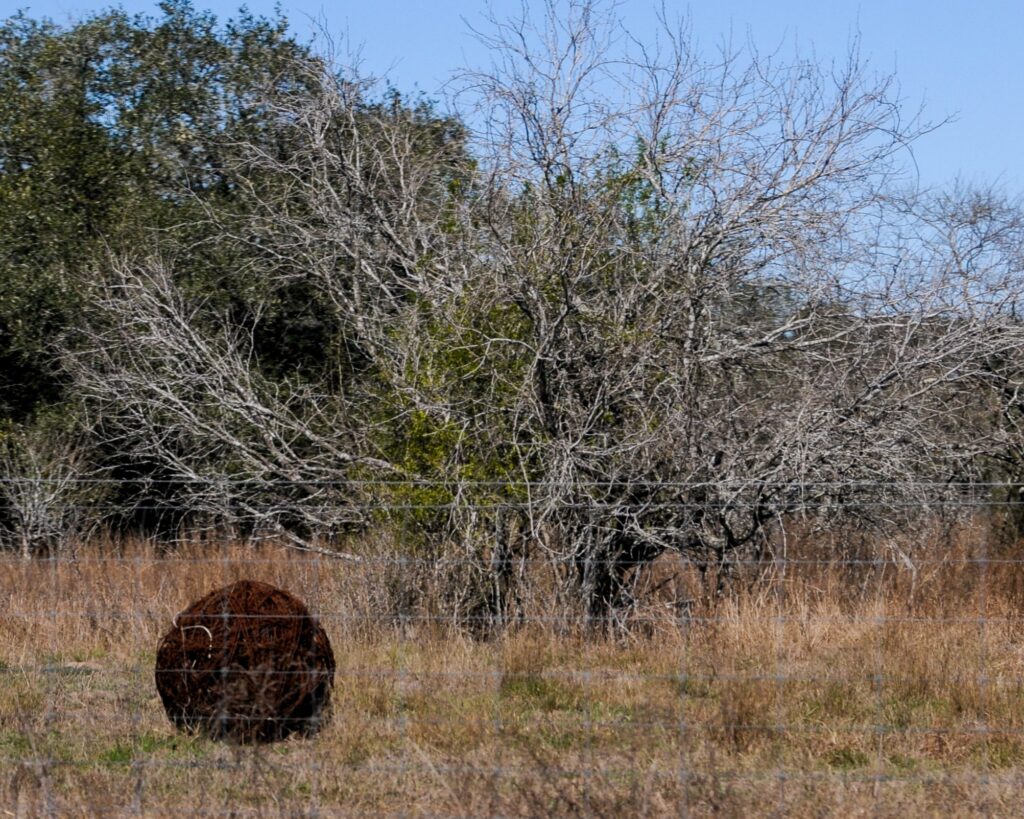 We arrived and pulled into the Goliad State Park where Lysette went inside to check in while I quickly searched my phone, doing some index finger exercises, the mindless scroll, and to look for any unimportant news. After a few minutes, she came back looking confused and said they didn’t have us showing as campers. I checked my email for the confirmation as it was already open and low and behold we weren’t registered there but at the RV park in town, Angel of Goliad RV Park. Funny.

So we swung the rig around and headed there, only about a mile and half and one left turn away, which was actually through the entire town of Goliad. The park was small but well maintained and we’d find the staff extremely pleasant and professional. The feel was more like a family hosting you at their farm than a commercial venture. We set up camp and made ourselves at home. 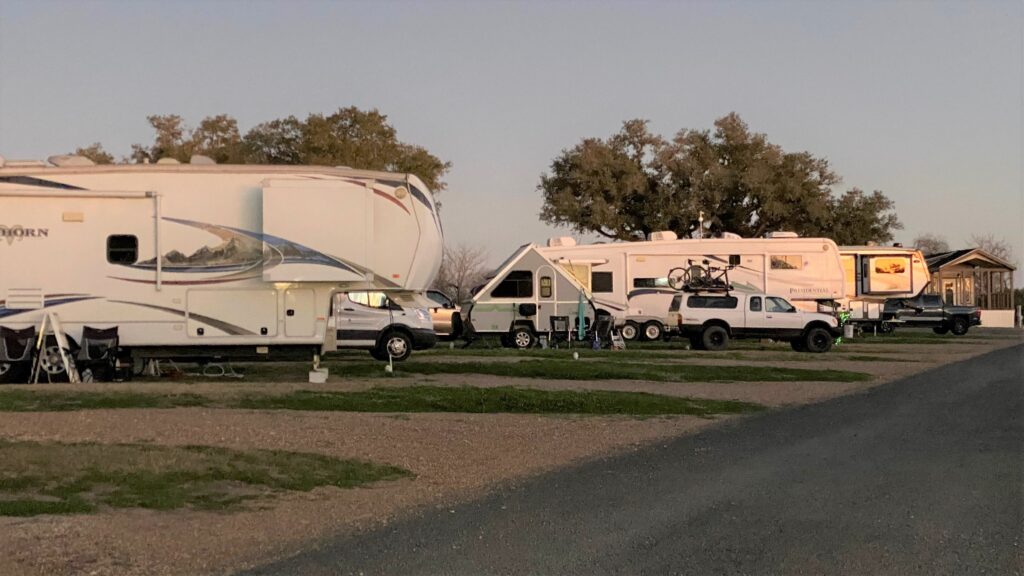 Goliad, Texas is small, like under 3000 humans live there small, is historical, and as one would expect from a historical place, it has several museum quality attractions to show case this history. The first historical thing is the Presidio La Bahia which appears as a block fortress with a church inside and was the first Spanish settlement in the area. Throughout history, the town and area would be governed by nine different flags representing nations at various points which include US, French, Spanish, Mexican, Confederacy, Republic of Texas on three separate occasions, and First Independence Flag.

This place was the birthplace of the Mexican War Hero, Ignacio Zaragoza, whose improbable victory at the battle of Puebla over France is still celebrated today as Cinco de Mayo. Salud! 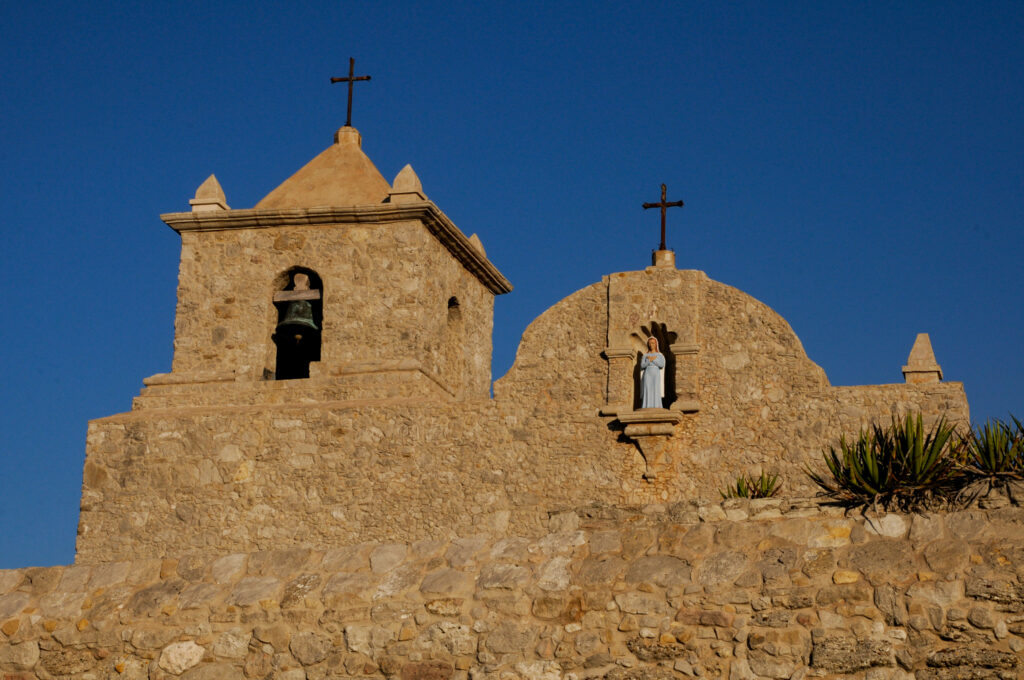 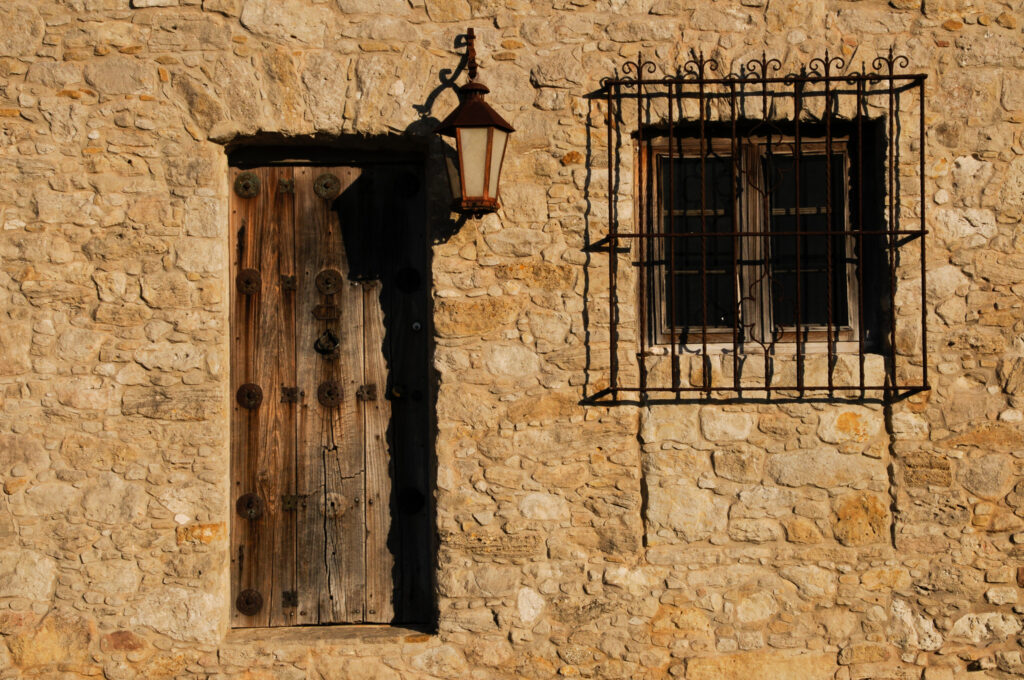 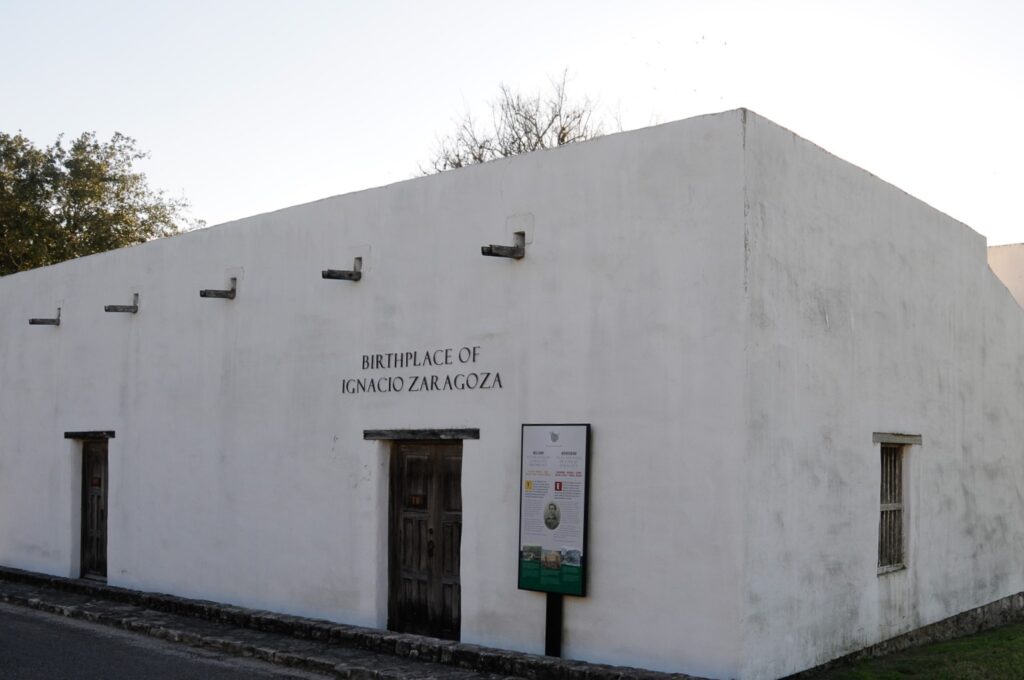 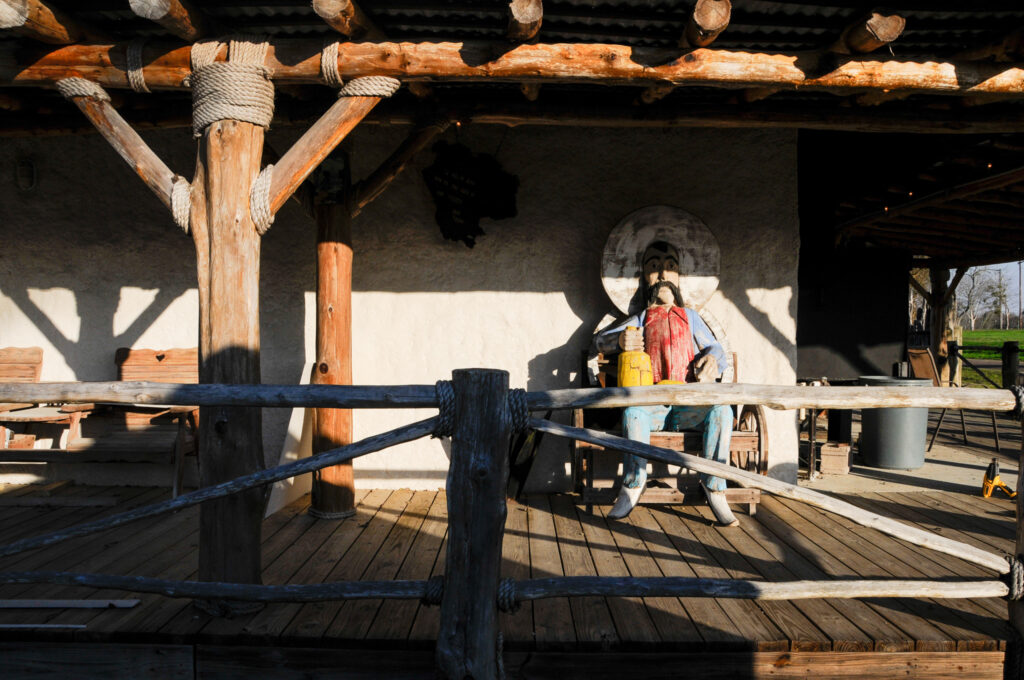 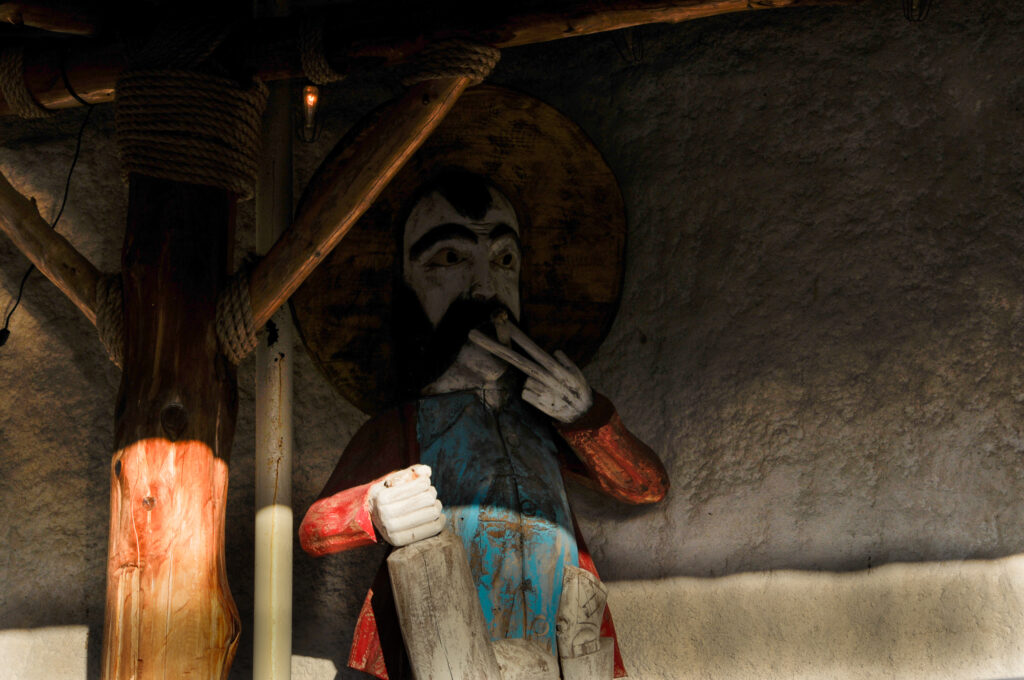 And then there was the Goliad Massacre which was the execution of over 300 captured Texas soldiers who had fought for their independence. The bloodbath was at the hands of the the Mexican army who had captured them.

A remarkable lady is celebrated here and is referred to by the name The Angel of Goliad, which is also included in the name of our RV park. There is a public park and statue of her that now stands as tribute to her merciless acts of bravery and compassion to help those suffering during this war for independence. 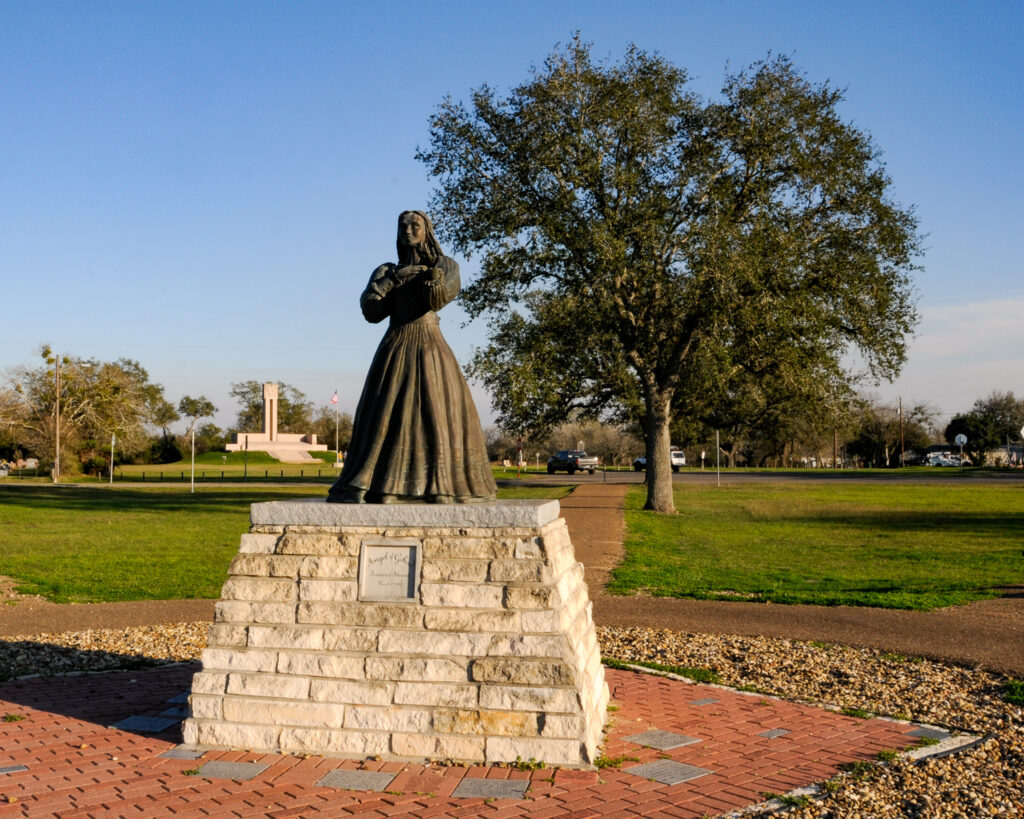 If this doesn’t fill your history folder then the Mission Espiritu Santo de Zunigo was one of the largest 18th century ranching operations and now serves as the state parks main attraction. The organization, with its marvelous mission and church, is on display under the management of the Texas State Parks and can be visited for a fee. The operation back in the day was run and managed by the Franciscan Monks with other workers to include Indians who had converted to christianity and other Spanish citizens.

Now I know you what you are thinking. There is no way all this can be in a small town that you likely never heard of before, but wait, there’s more! You also get the really cool historic 19th century downtown built in a square. The outer edges are lined with small shops and restaurants and the center piece is a park like area with the old 2 story courthouse complete with large live oaks, one labeled as the hanging tree. Yup, a hanging tree. The large oak labeled as such, is located just beside the courthouse in the center square with several beefy horizontal limbs perfect for killing the person just found guilty of a crime, likely horse thievery or some other heinous crimes of the time, with the penalty of death. The convicted went straight from judgement to the front lawn where a horse and noose were waiting allowing no time for the modern day last meal, much less an appeal.

But even though I’ve always enjoyed history (actually having minored in history back in the day), we weren’t here for a history lesson. We were here to bike so a ride on. Research and Travel found us a bike route from an annual event called Tour de Missions. Lysette uploaded the route on her phone, we were now well fed from breakfast, Toohey exercised and fed, me simply eager to do anything just to hang out with Lysette, and we set off. We also got permission from RV park management to allow us to park the Tacoma under a shady oak (not the hanging tree of course) for some extra coolness for the dog as he napped while protecting the assets.

Our ride was out of town and along low use farm roads flowing and rolling through the countryside. We stopped at one point to enjoy a field where Lysette spotted a couple of large birds off in the distance which turned out to be emus. We stood by the fence watching as they pecked and walked clumsily towards us. We stood commenting on these tall birds, on their strange prehistoric looking gait, with long necks, and protruding eyes. I wondered aloud, and we debated on how this small wire fence, maybe 4 feet high, could possibly hold a bird in the pasture, sure a cow, but a bird? We later read how feral emus now run wild in Texas. They were at one point extremely profitable to farm based on breeding, meat, eggs, and oils. Emus (Aussie for a tall, clumsy, flightless, and notoriously obstinate bird) brought in a value of around $50,000 a breeding pair at its peak but as the market got saturated, the price dropped to as low as $2 a bird. With the birds now out of favor, they “escaped” out of fences likely as high as the one we were standing in front of and are now living wild. In my opinion, these were likely wild emus, a conversation she and I debated over a few times while standing fence side and even up to the typing of this blog. We also disagreed on whether we were in any danger as I had heard they could eviscerate a man with their 3 toed talons. But either way, we likely escaped an accidental death by emu as we rode off after they approached. (Further research did suggest that human death by emu is extremely rare.) 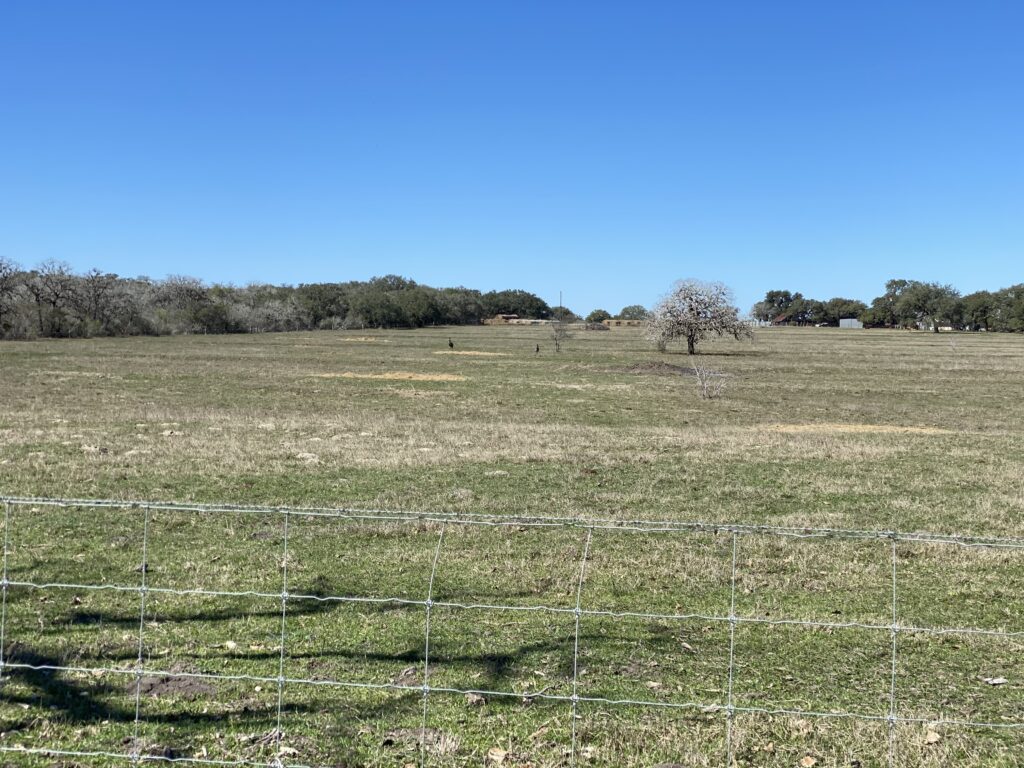 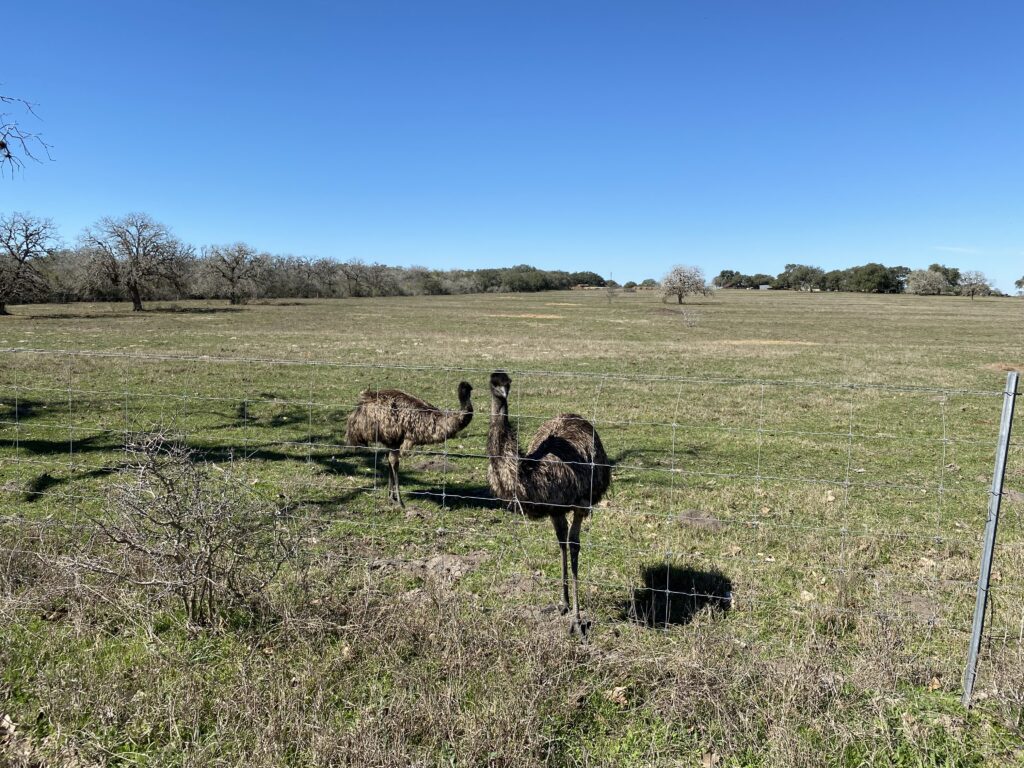 With Lysette feeling antsy to keep riding, but me enjoying the simple things of the day like watching emus, we headed on, as I always like to make her happy because I love her dearly. The roads were hilly, a bit lumpy, but quiet. At one point we stopped just to enjoy the quiet, the silence of being away from all the city noises and tourists. 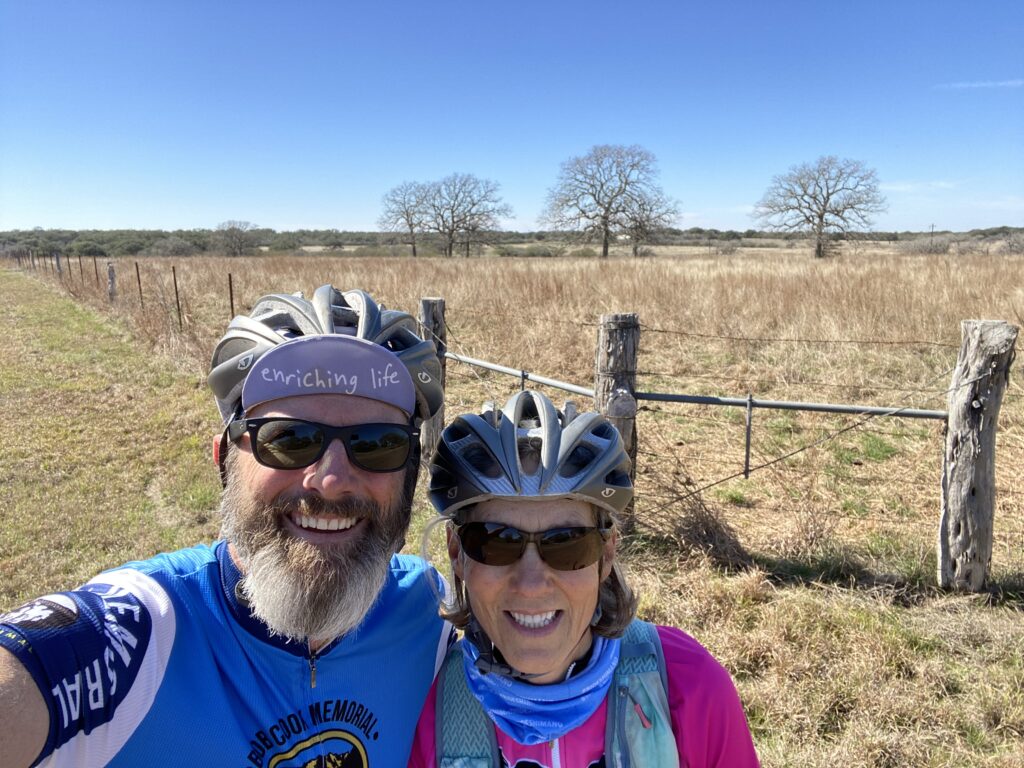 We later rounded one corner where a large heifer was standing on the roadside. She looked at us, and we at her as we rolled ever closer. As we rounded the corner, her corner, and now maybe 20 feet from her, she turned with panic in her eyes and ran. Seeing something that large run is just odd to see up close but seeing it jump a low fence to get back into the corral it obviously wasn’t suppose to be out of, was a funny sight. It rejoined the herd and we continued on having likely escaped near death from a fence jumping scared heifer. (No research was done on the likelihood of death by this peril.)

All along the ride we kept seeing and commenting on interesting balls of mass in the trees. The trees being deciduous and now without their leaves, making their bare gnarly limbs appear as though they had been decorated by these round grayish balls. Wondering what these tree accessories were, we stopped to examine them up close. They appeared like balls or clumps of Spanish moss. Later research would confirm they are air plants called ball moss, they aren’t dangerous so we didn’t escape death by moss balls. That would just be silly. 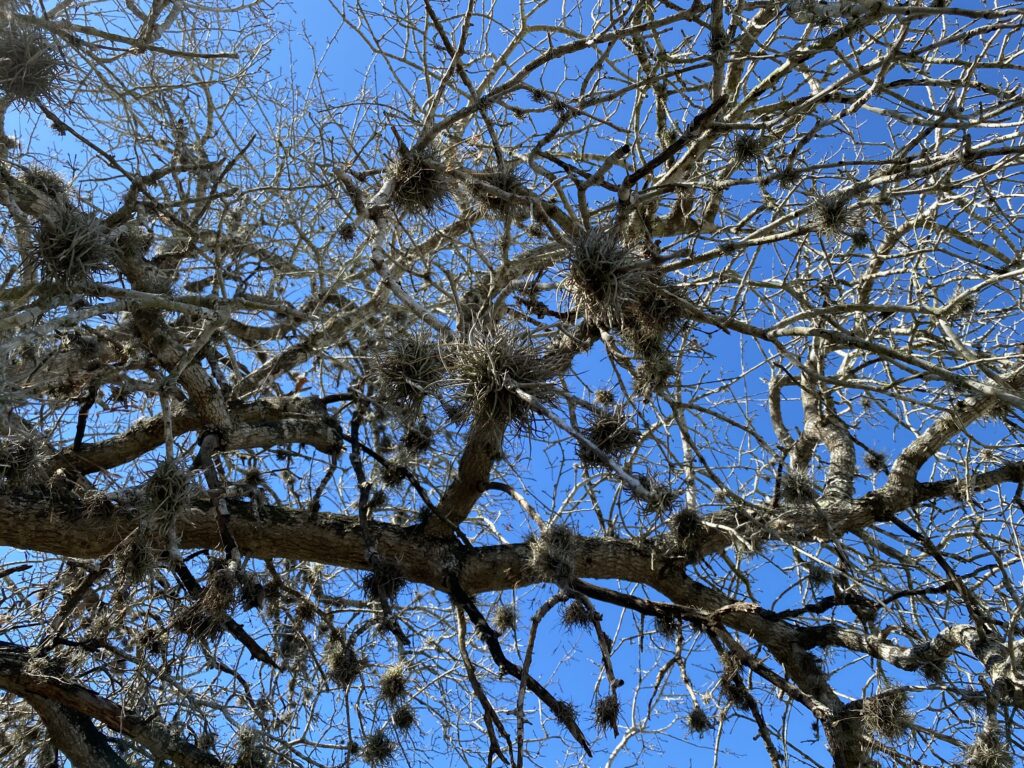 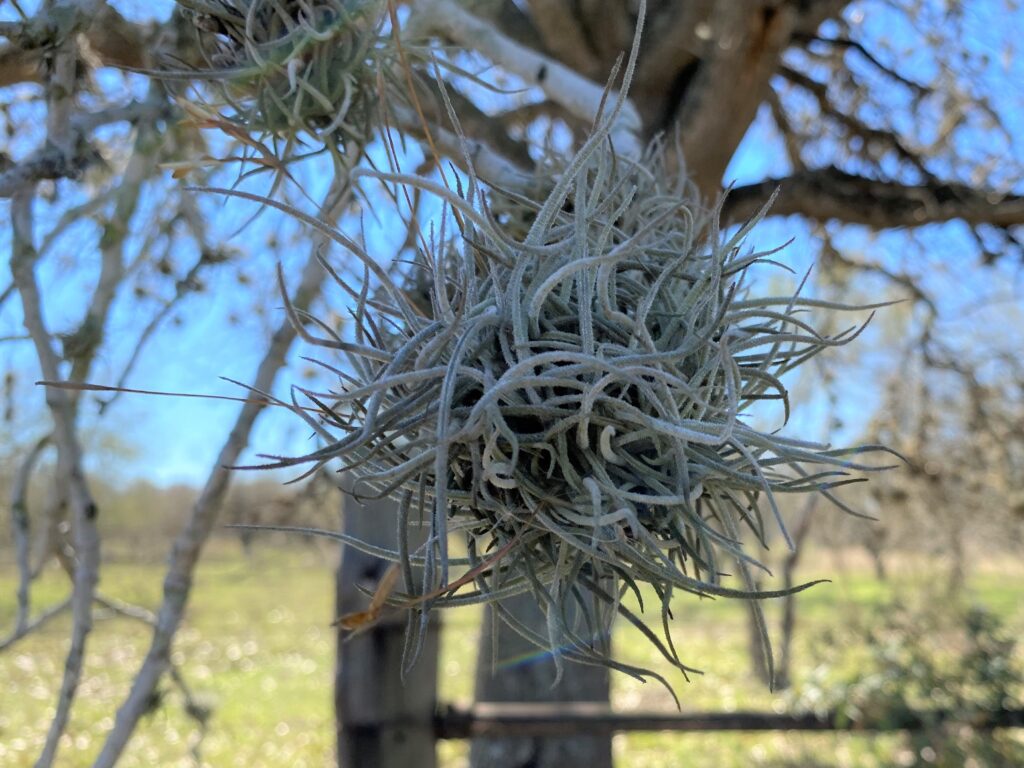 Having cheated death multiple times, we made it home spending time relaxing, ordering prescription refills to pick up when we get to Fredricksburg, and finally a drive around town to see all the historic stuff which was extremely interesting. We both commented on how much we liked this little town, the feel of the place, the cycling roads, and the history.

Our time, one day and two nights, in Goliad provided a great first taste of this part of Texas and was very inspirational to the TWT team. The town was hospitable, interesting, and quiet. The weather was sunny, dry, and warm, perfect for us. We enjoyed the big western sky that we both like and have longed for since leaving it back in early September. This stop makes us just want it so much more.

Our last few days in Fredricksburg have been a drastic change with the winter storm that blasted through. Temperatures dropped to record lows, snow covered the place along with ice on everything we own except the teams positive mental attitude. We remain strong and have enjoyed this area so much that we booked a few more night here to extend out time with better weather. More to come.